Temples to visit in Angkor

Travelling to Cambodia and visiting the Angkor complex? Here’s our guide to exploring the Angkor complex. The top 7 temples to visit in Angkor including the renowned Angkor Wat Temple. Nestled amidst the farms and forests of Cambodia, north of the Great Tonle Sap Lake and the urban sprawl of Siem Reap lies the  Angkor architectural complex. A site so remarkable, it would give even the greatest of Renaissance masters a moment of pause. Such is the craftsmanship of the Khmer hands that carved the beautiful temples of Angkor.

The Khmer Empire has long since crumbled down the pages of history. However, their architectural flair and divine fervor lives in the form of hundreds of temples and shrines. Most of which still stand today in Angkor, the crown jewel of the Khmer kings. Be sure to add these top 7 to your list of must-see temples in Angkor.

The first thing you need to know about Angkor is that the place is huge. This city, built during the peak of the Khmer Empire, is roughly the size of modern-day Paris. Through repeated looting and sacking, much of Angkor is in ruins and overgrown. Dotting the landscape, however, are some truly magnificent sights.

The famous Angkor Wat, the intricate Angkor Thom compound, the wild and overgrown Ta Prohm are but a few sights to savor on your trip to Angkor. Explore around the area and you will stumble onto many more wonders. If you are backpacking through Cambodia or simply soaking in the tropical sun that embalms these lands, you simply must visit these amazing locations of the Angkor site. While planning your Angkor itinerary, don’t forget to account for the weather and the best time to visit Cambodia. 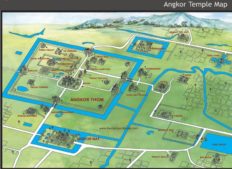 A guide to the prime sites within the Angkor complex. Image credits: Tourism of Cambodia

Angkor Wat is by far the most famous temple within Angkor. This UNESCO World Heritage Site constructed in 1150 is a standout example of Khmer artistry. Angkor Wat has marveled many a European visitor during the colonial era and it will certainly amaze you with its intricate sandstone towers and half a mile-long gallery adorned with bas relief depictions of Hindu mythology.

The sheer size of the Angkor Wat Temple always catches visitors off guard. Three times taller than the tallest spires of Notre Dame, covering an area four times the size of Vatican City, Angkor Wat remains, to this day, the largest religious monument on Earth. Such is the allure of the Angkor Wat that it even finds a place on the flag of Cambodia.

Angkor Wat is famed for its spectacular sunrise. This also happens to be the time when the temple is most crowded. And when it gets crowded, it really gets crowded. Angkor Wat attracts thousands of tourists every year, and it is not surprising as the place has such unique lore and heritage. 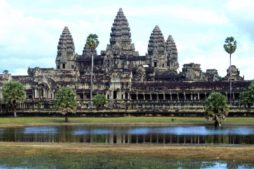 Just a glimpse of the Angkor Wat Temple from the outside. Proceed inside and be prepared to be left awestruck.

Besides the Angkor Wat temple, Angkor Thom is one of the most popular sites to visit in the Angkor complex. This world renowned site is a vast complex that encompasses many stunning sights which include the Royal Palace compound. It was the last great capital city of the Khmer towards the 13th century when the empire began to crumble.

At the heart of this archaeological wonder is the Bayon. Upon completion, it was decreed the national temple of the empire. A spot that was previously occupied by Angkor Wat. Bayon is a remarkable site that depicts the transition from Hinduism to Buddhism. This is evident in the form of a multitude of smiling faces of the Buddha. The outer walls and galleries are adorned with depictions of daily life in the city.

The Terrace of the Elephants is another highlight here. This raised platform gets its name from the elephant sculptures that adorn it.

Apart from Bayon, the other great temple within this complex is the Baphuon Temple. This Buddhist temple features a 9m tall reclining idol of The Buddha. 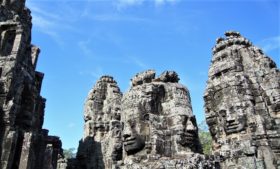 The stunning Bayon Temple at the renowned Angkor Thom complex.

A mile east of the Angkor Thom complex lies one of Angkor’s most unique sights. Ta Prohm was a temple complex that was neglected and largely forgotten after the fall of the Khmer Empire. Upon witnessing the resultant beauty that arose from centuries of seclusion, the archaeologists commissioned for the restoration of Angkor in the early 21st century left Ta Prohm largely untouched.

The result; a harmonious union between the temple and jungle. In certain spots, the jungle seems to be growing out of the very bowels of the structure. This feature of Ta Prohm makes it a truly unique sight amongst the other temples of the Angkor complex. And earns a definite spot on our list of must-see temples in Angkor. 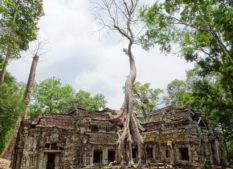 Ta Prohm is an ode to nature. Untoched for several years it appears as though it has been swallowed by the Jungle. This “Tomb Raider temple” is unique in every way.

If you’re visiting the Angkor complex, this is one of the unmissable temples to visit in Angkor. The hilltop shrine of Phnom Bakheng is one of the oldest temples of Angkor. Built in the early 10th century, Phnom Bakheng is also known as the ‘sunset temple’. It gets this title from the stunning panoramic view it offers of the sun setting over many of Angkor’s more famous temples.

Catching a glimpse of fading daylight on the tall towers of the Angkor Wat temples lures hordes of tourists to this spot. Phnom Bakheng is a beautiful example of early Khmer architecture. Be sure to make note of this wonder on your list of must-see temples in Angkor. However, this site is notorious for attracting large crowds.

Want to understand how to get around Cambodia? our detailed guide explains 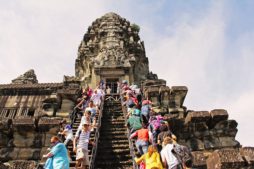 The prime highlight of this site is its pyramid like structure. A mountain temple built in the 9th century.

Similar to Ta Prohm, the Preah Khan temple complex is overgrown and left relatively untouched. This adds to the charm and ambiance of this beautiful temple. Preah Khan is a predominantly Buddhist temple. It even housed a Buddhist university during the late Khmer reign.

Today, the temple is mostly in ruins and overgrown with trees that seem to engulf the complex. The complex is surrounded by a moat and high walls that depict carvings of an ensuing battle between Garudas (Eagles) and Nagas (Serpents). The history of these ancient ruins is what makes Preah Khan on our list of the top temples to visit in Angkor. 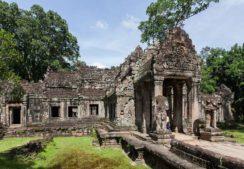 Located 35 km north of Siem Reap, this temple is a sandstone marvel constructed in the 10th century to the Hindu god Shiva. Although small in size when compared to Angkorian standards, this temple is lovingly ordained in beautiful carvings and sculptures. A true testament to Angkor craftsmanship.

Bantey Srei is often referred to as the jewel of Angkor due to its small size and its intricate beauty. Although this temple is one of the furthest from the grand circuit route of Angkor, a visit here is worth your time. Be sure to add this to your list of must-see temples in Angkor. 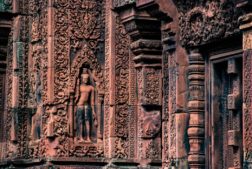 The intricate carvings of this surreal 10th century Cambodian temple dedicated to the Hindu Lord, Shiva.

Ta Som may lack in size, but it makes up for it with its natural beauty. As both civilization and nature try to occupy the same space this temple is suspended in stasis, much like Ta Prohm. The resulting conjugation of the two is both charming and endearing. This and its unmatched beauty are reason enough for Ta Som making it to our list of the top temples to visit in Angkor. 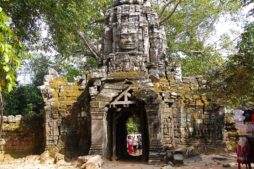 Ta Som may be small in size, but it’s architectural beauty is definitely unmatched.

These are just a few of the many places and temples to visit in Angkor. The Angkor Wat Temple is most popular among tourists, however, there is a lot more to the Angkor complex than just that. If you are planning an itinerary for your trip to Angkor, then you can check out our guide to exploring Angkor for more information. If you’re in Siem Reap make sure you indulge in other exciting activities in the city. We hope you are as excited about your trip to Angkor as we are about planning the perfect one for you. Get in touch with us and we’ll be sure to plan the ideal trip to Cambodia with a blend of history, culture and nature. A trip curated to meet all your needs and interests! 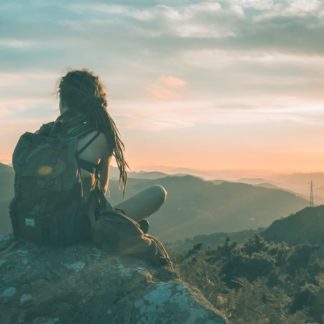 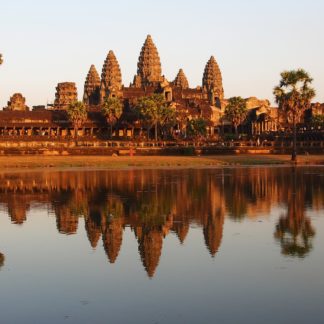 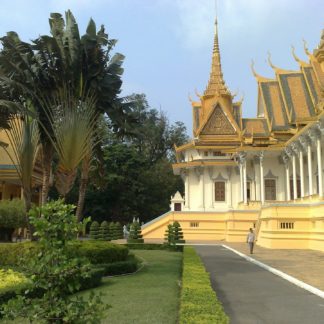 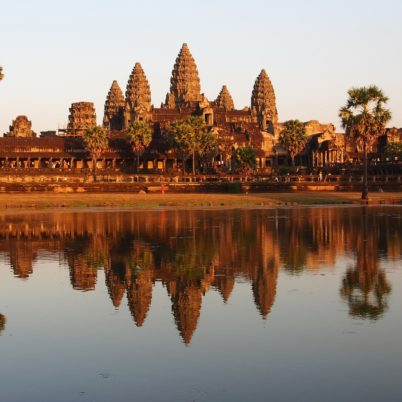 The months of June, July, and August mark the start of the wet season ..... 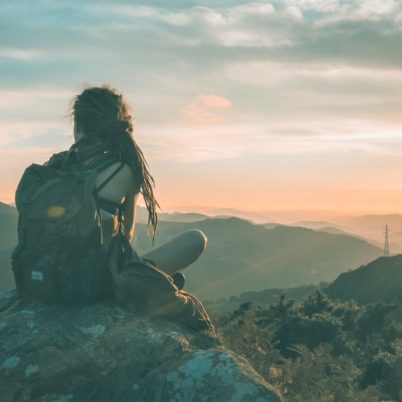 Backpacking in Cambodia is an absolute delight and highly recommended ..... 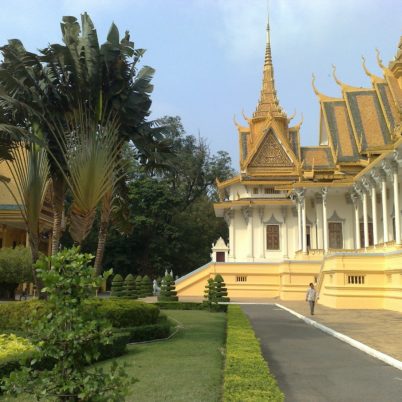 Getting from the prime Cambodian cities of Phnom Penh to Siem Reap or .....